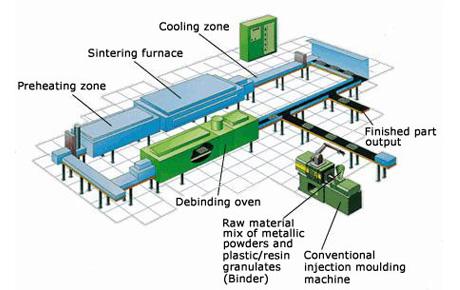 Metal Injection Moulding process (M.I.M.) has been developed in the USA on the early nineties, mostly for applications on military sector. In the following years, after overcoming initial difficulties, the method was used more and more, on one hand because of the interest of a growing number of Companies that have developed the process, but also thanks to the growth of markets where M.I.M. could be applied.
At present sectors as Aerospace, Military, Precision Mechanics, Medical, Watchmaking, Automotive are interested or already using M.I.M. technology.

1) INJECTION
The feedstock is injected by a special screw machine (similar to plastic injection).
The result is a component of solid structure (mix powder metal/resin) called Green Body, over dimensioned according
to a shrinkage factor dependent to each kind of alloy.

2) DEBINDING
The injected components (Green Body) are introduced in a oven to be subjected to catalytic debinding: removal of the binding resin causes reduction of the weight of the part.
The week solid structure composed by metal powder aggregates it’s called Brown Body. During this phase no dimensional
changing happens but weight reduction (because of the loos of the resin component).

3) SINTERING
Eliminated the resin, parts are introduced in a special sintering oven. Specific thermal cycles in vacuum oven or monitored atmosphere determinate the coalescence of the metal powder particles. The part assumes the configuration of minimum volume until compacting. Acquisition of mechanical and dimensional characteristics are measurable by final density and dimensional shrinkage (about 20%): the obtained part is in complete similar to a casting.